Another early start to my second-last trip of the 48 4000 footers.  This time to do a "lollipop" loop that covers both of the Hancock mountains.

We met at Einstein Bros. in Concord - this time joined by a colleague who hadn't hiked a 4000 footer before. 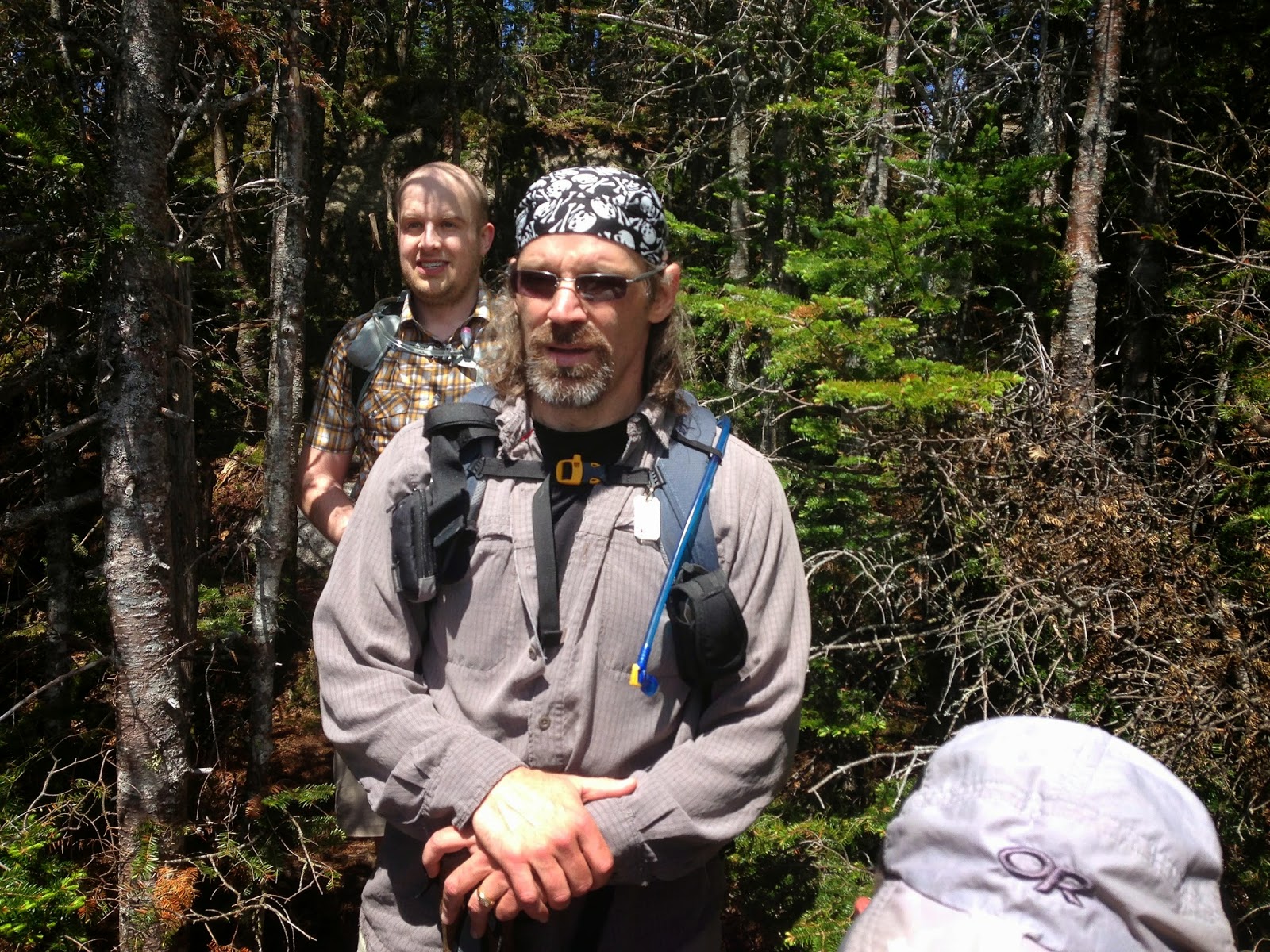 I ordered the salmon and creme cheese bagel - like the last time I was in favor of avoiding a greasy breakfast - and ordered a chicken salad sandwich for lunch on the mountain.

Bruce did this hike alone when he did his 4000 footers and had recorded a (impressive, as it turned out) time of 4 hrs 15 min.

The trailhead is on one end of a hairpin bend on the Kancamagus Highway and involves crossing the highway in order to start.

The path up to the first junction in the trail is a very long even path which seems to go on forever (about 40 min) before turning off to the left onto the trail "proper".  The route that we took crossed a stream a few times with newer sections of the trail that skirt around the bends in the stream to reduce the number of crossings.  I suspect that these trails were cut during a period of high water and not knowing any better we took these side trails on the way up.

A steady ascent with a fairly even gradient brought us to the second junction in the trail which is where the loop around the two peaks begins.  We chose to go counter clockwise which meant going up South Peak first.

At this point the trail gets steeper - although still at a fairly even gradient that resembles more climbing steps than the high stepping and scrambling that is common to many of the 4000 footer trails.  Being his first 4000 foot hike, Jeff needed to experiment with his pace and reminded me of my earlier hikes with a few forced stops to catch his breath on the way up.

The trail up doesn't really offer many views but on each of the summits there is an outlook that offers great views to the South West and South.

The weather was perfect for hiking with temperatures in the high 60's in the valley and in the mid 40's on the peak.    South Hancock is 4,319 ft.

The ridge trail was a really easy walk and while the elevation gain between the two is enough to make them both qualify as 4000 footers, it was mostly a gentle hike up to some steep scrambling near the North summit (4,403 feet). 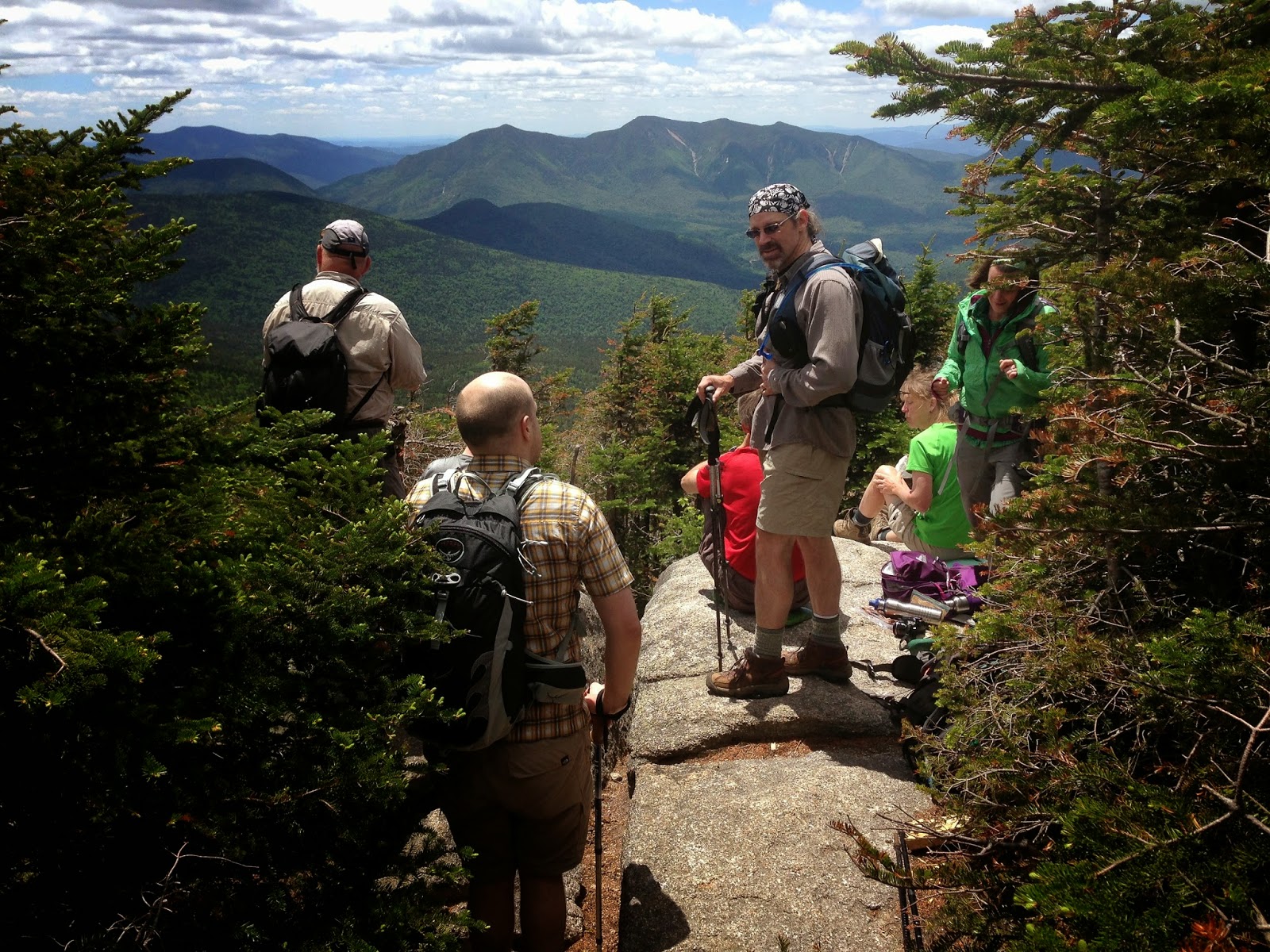 The overlook at the North Peak was pretty busy and fairly eventful.

While we were sitting there a hiker arrived with blood streaming down his leg.  We asked him if he'd met a rock on the way up and he held out his left hand which was pretty swollen with a somewhat twisted baby finger.  He said that he had been running up the trail and had fallen. After refusing pain killers he let us know that he was going to go on to South Hancock before heading back home.

After he left, one of the hikers offered food in her hand to the Grey Jays that were hanging about and one of them ate from her hand! 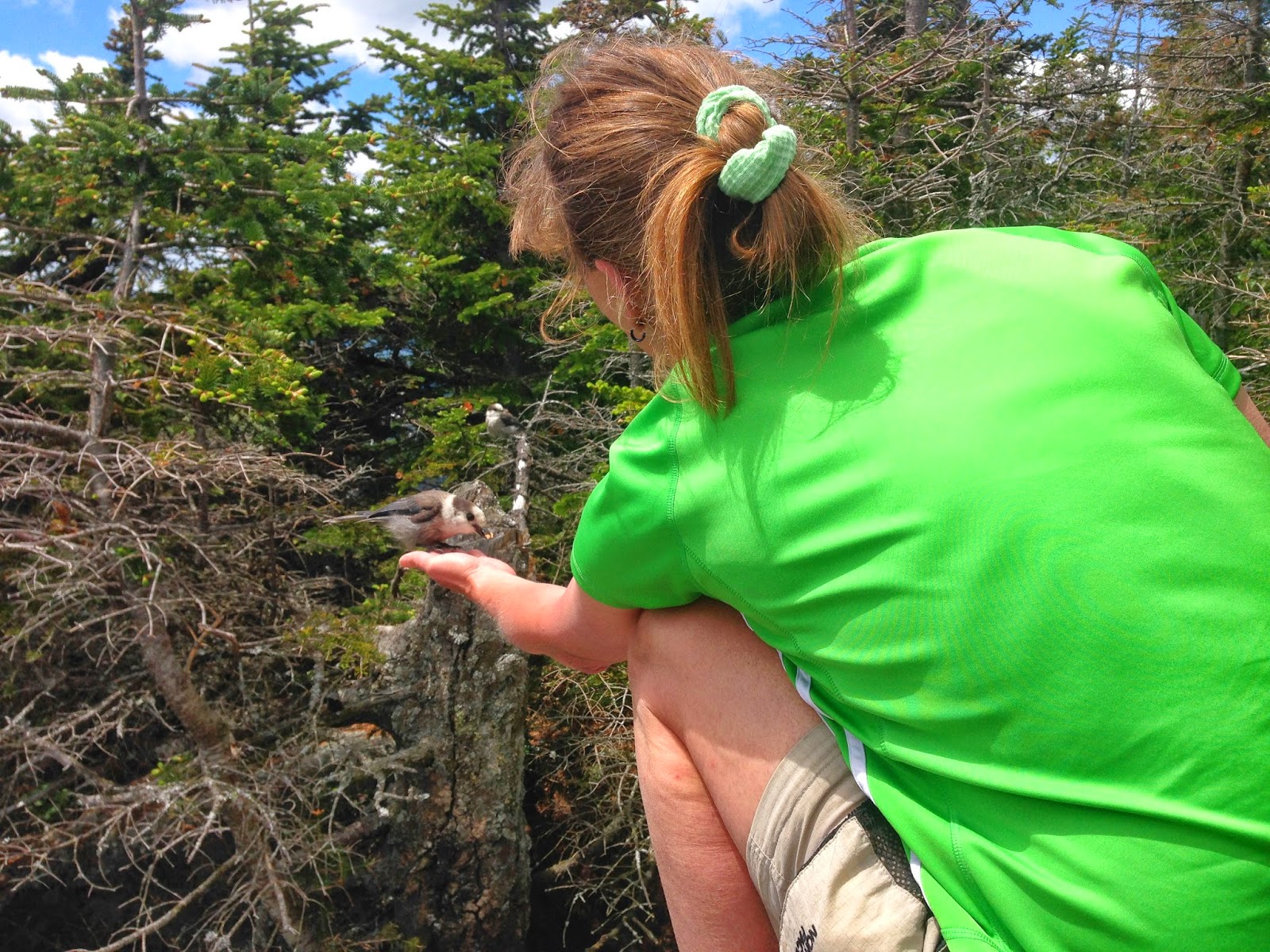 The walk down was uneventful aside from discovering that Jeff on his first 4000 footer had managed to drink three litres of water - emptying his supply.  I dubbed him the human sponge after looking at my water and seeing that I had drunk less than half a litre.

We realized that the trail down the North peak was pretty steep - covering some portion of a slide - and is probably the better way to ascend (we made a mental note of this for next time).

After the junction at the bottom of the summit loop I paused at some of the river crossings that we had missed on the way up and took photographs of the water. 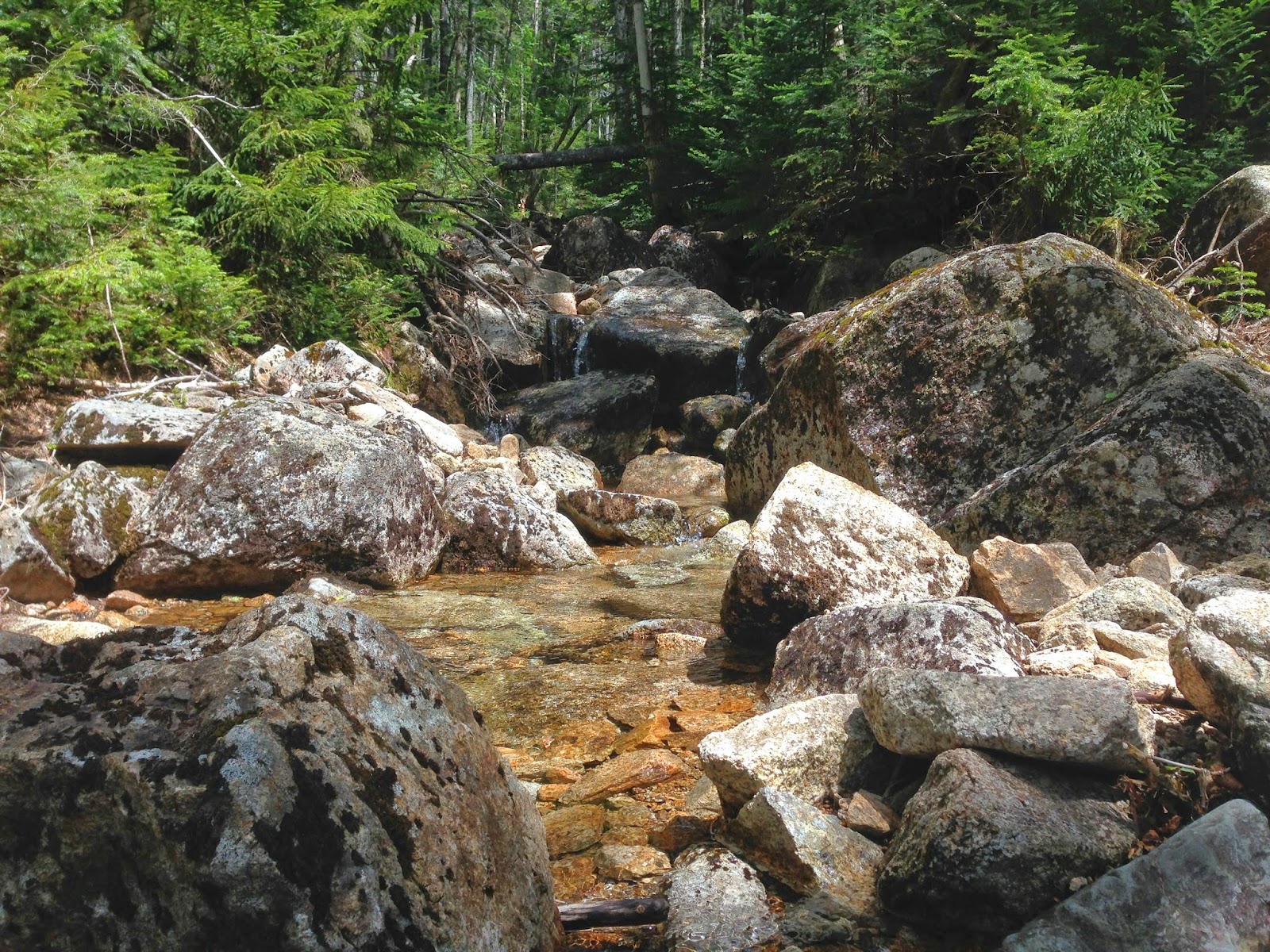 Including the crew crossing.... 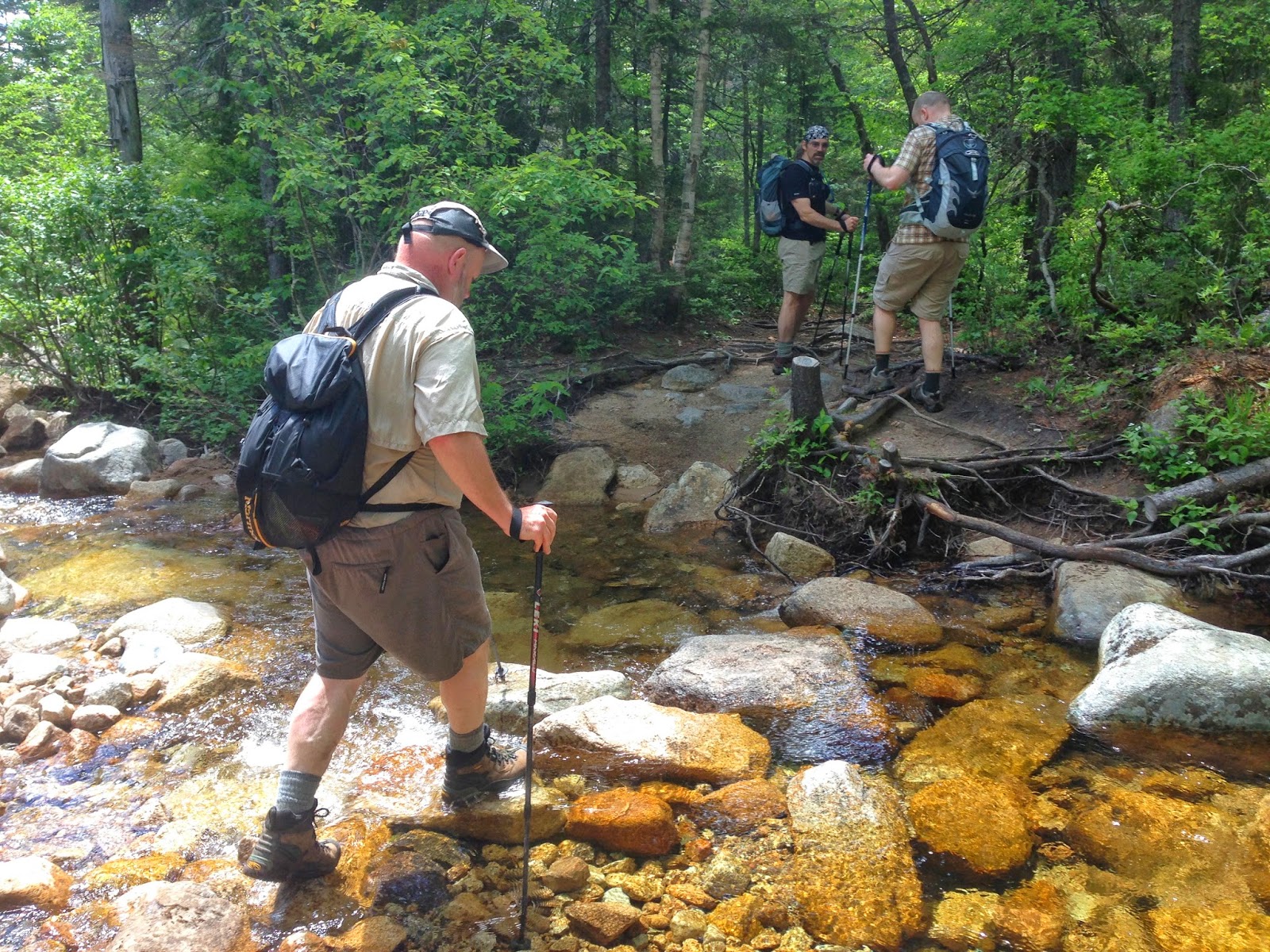 and a few horizontal ledges. 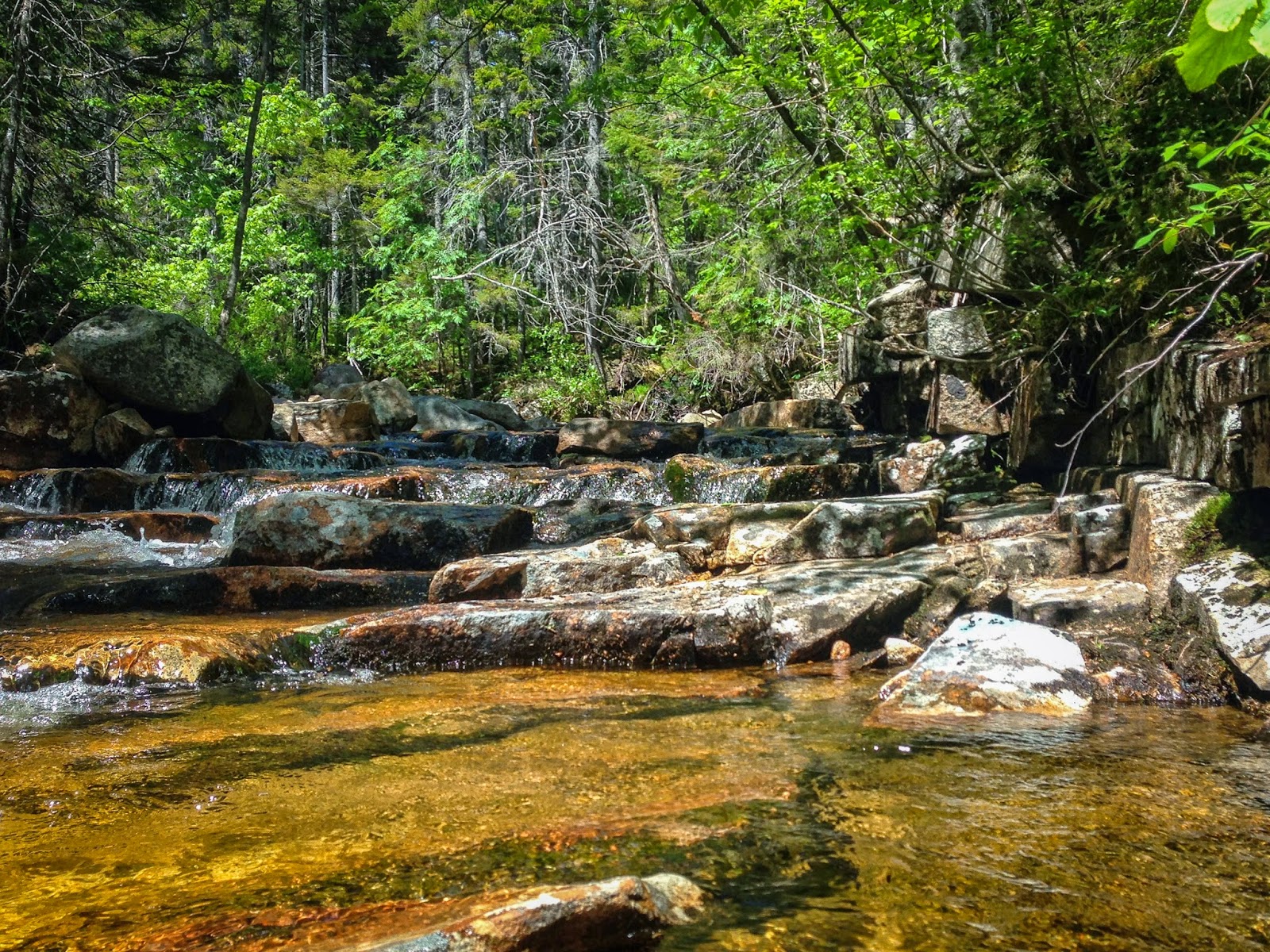 We got back to the parking lot at 3:30 after 6 and a half hours of hiking - 15 min over book time.  This time it was me who pronounced that "we had cheated death once again". 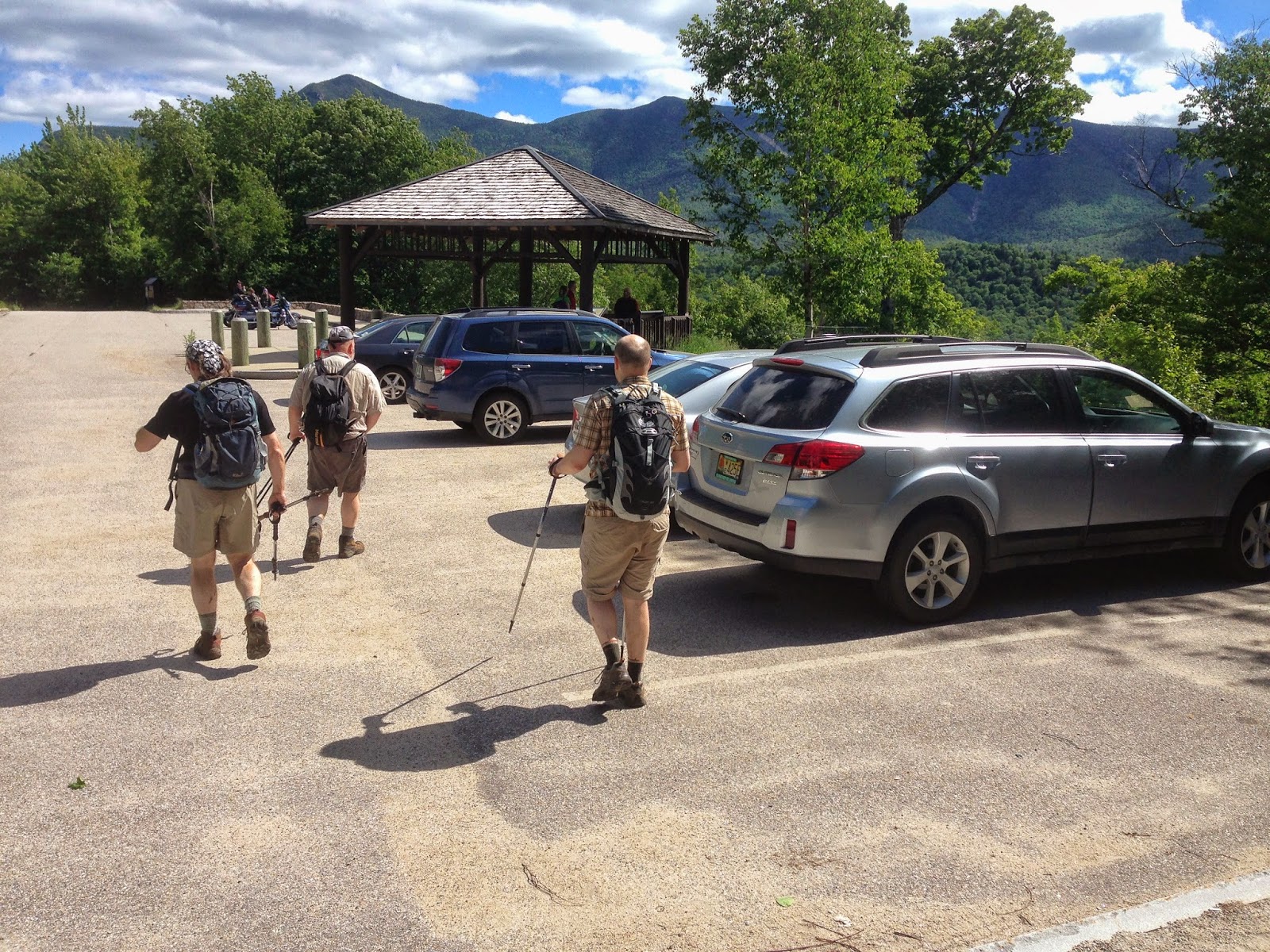 Another 4000 foot mountain under the belt - this time including a lively discussion about capacity management and vertical scale of our software "stack".

We met as usual for breakfast at the Einstein Bros bagel shop in Concord.  I have learned form experience that the Starbucks and Dunkin Donuts en route to Concord are all closed near 5am so I usually skip breakfast and coffee in anticipation of breakfast after the 90min drive.

Breakfast at a bagel shop is a little tricky because you can easily end up with something that is pretty greasy on the bagel.  At 7am there is some danger that a greasy meal may not agree with the rest of your day.  I was musing about whether I was up for this when I noticed a menu item for smoked Salmon and cream cheese.  With a little trimming I was able to order the simplest configuration ("yes, just the salmon and the cream cheese, that's all") and combine it with a dark roast coffee just before Bruce and John arrived.

Mt Hale is the 4th last hike in my list of 4000 footers.  It is, like Tecumseh, a hair over 4000ft (4055ft) with a relatively short hike to the summit of 2.2mi.  The trailhead is off Zealand Rd and the summit is north of the mountains that we climbed when we did the Pemi loop in 2012.

The weather forecast for the day was mild with a fairly high chance of rain after 2pm.  Given how short this hike is and with a start of 10:40am we expected to be done well before 2.

Early on in the hike we crossed a small stream with some short rapids that were flowing pretty well at this time of year. 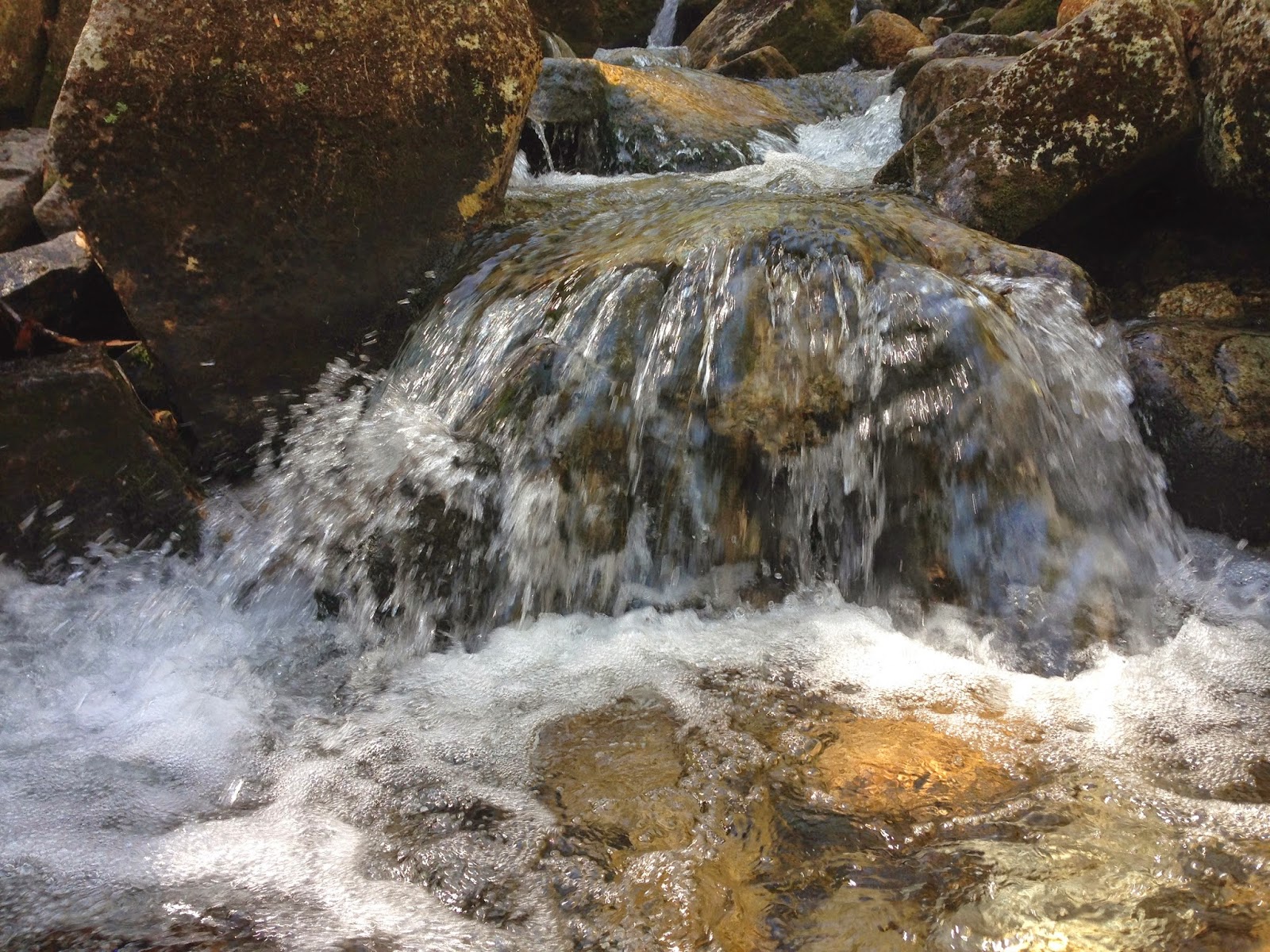 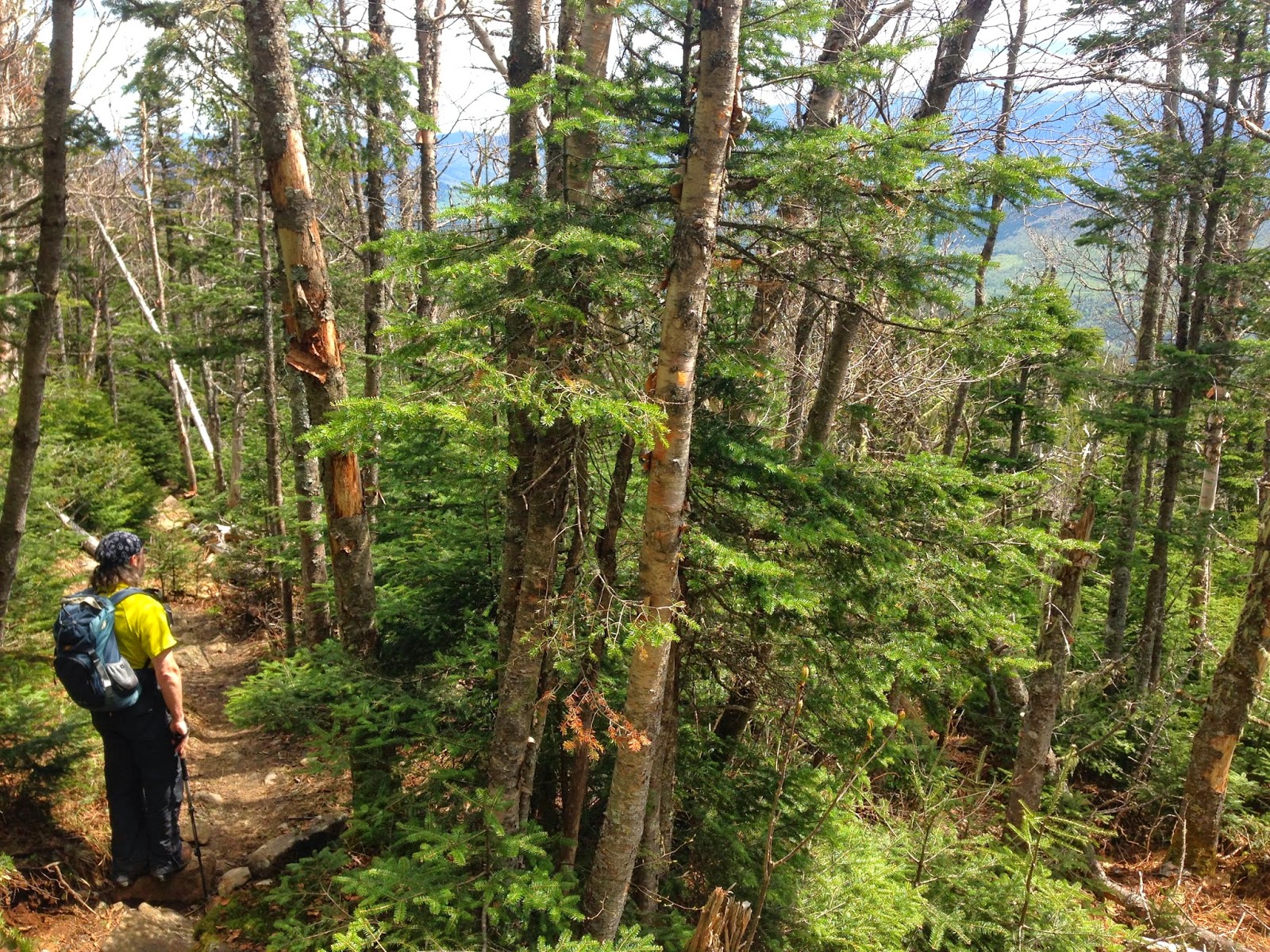 At one point we were able to see somewhat of a view from the path but in general this is not a hike that offers much of a view.  Even at the summit, which has a fairly large cairn on it, the view was of the trees surrounding us. 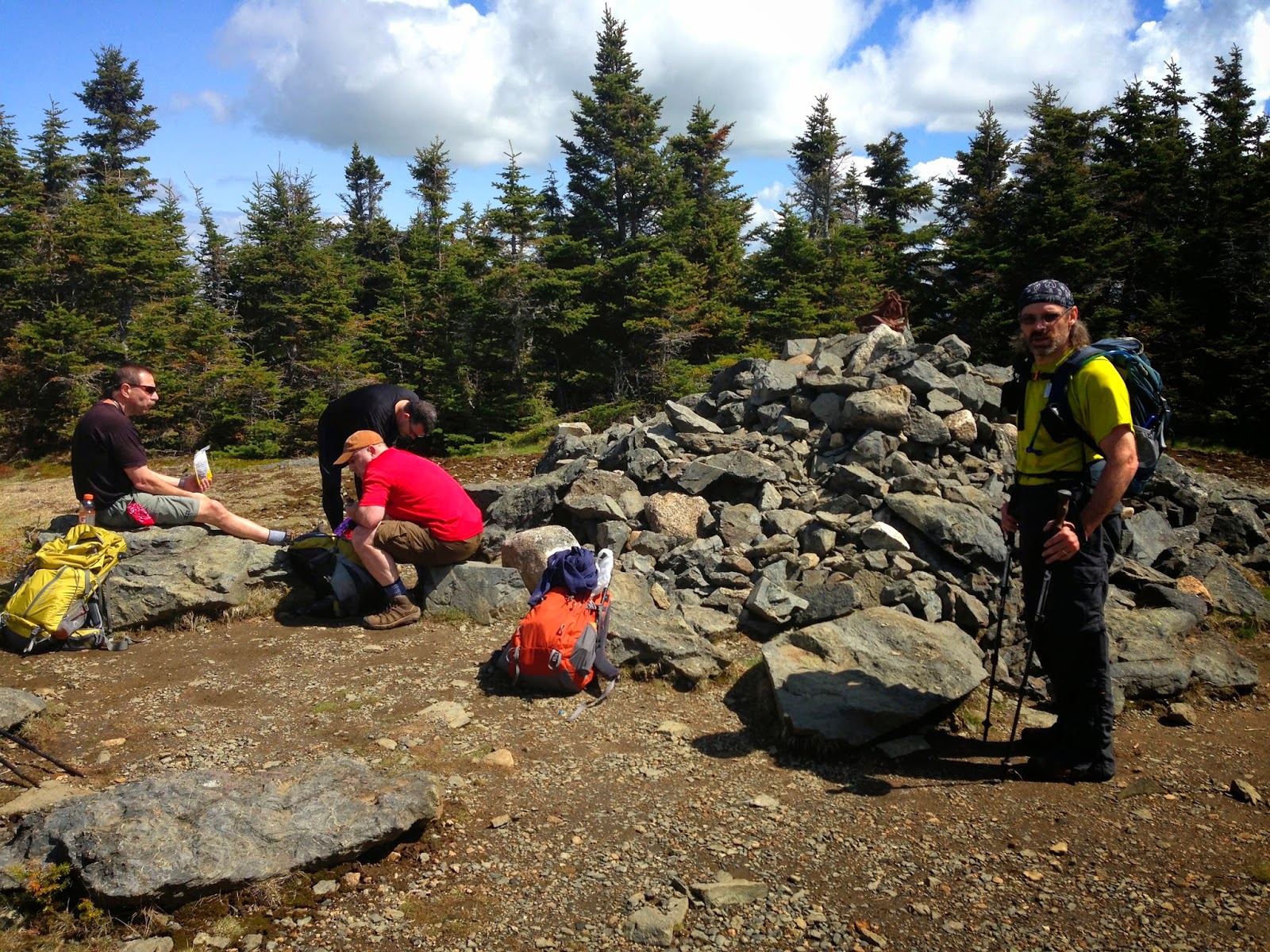 We met a few other hikers - in particular a group who were going on to hike Zealand after Hale.  They had already resigned themselves to the weather and surprisingly reported that they had rarely hiked up in New Hampshire without getting wet....  John must lead a charmed life because the exact opposite has been true of all of our trips - he usually checks the weather beforehand!  We have narrowly escaped getting wet by arriving at the car just as the rain started on two occasions - this being the second of them.

I think that this was the first of our hikes that didn't end with John saying:  "Well we cheated death once again...."

We must be getting better at it.