This hike up Mnt Cabot was to mark the last of the New Hampshire 4000ft summits for Bruce.  He turns 49 this year so he has the distinction having completed the 48 in his 48th year over a period of 18 months. 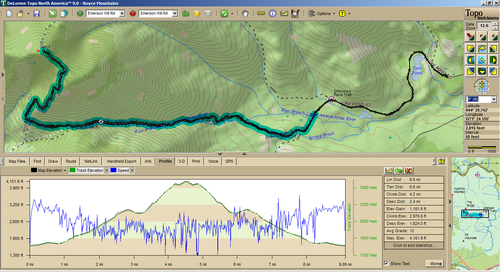 (image from John’s GPS with our trail in blue)

Doing them all in 18months is fairly impressive though we have heard of people who do variations of these like completing all of them in one season, or doing all of them in winter and if you can believe this: running through all of them in one go - the fastest on record being Tim Seaver who, in 2010 did them all over 3d15h50min.  I started (at the time with no list in mind) hiking in New Hampshire in 2007 with a couple of the 4000ft and have gradually increased the tempo but it could be 7 years from start to finish for me.

For Bruce’s last hike on the list we started as usual with me leading - a tradition that favors my overall slower pace particularly on the uphill. 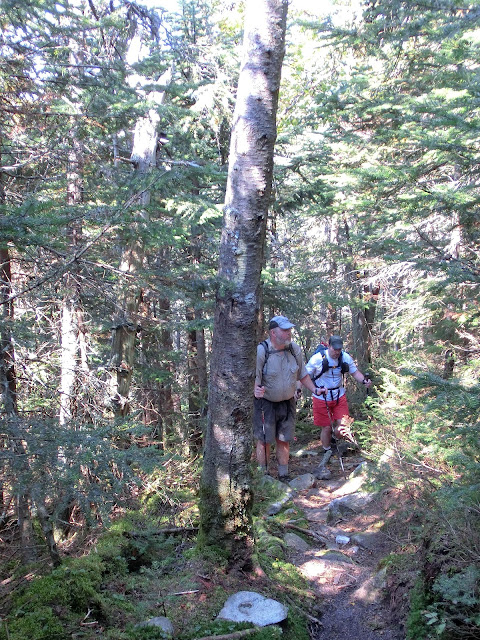 Since I have been exercising more regularly in the gym I have become less concerned about how much I am slowing them down with this pace - though given how closely they follow me it is clear that it is still slower than they would ordinarily walk.

My big mission nowadays is to keep going at this pace - even over what felt like a pretty relentless hike.  It used to be that I’d stop fairly frequently for a breather, water or to take a photograph.  I still stop for photographs but now it is because I really want to take the picture and not because I am exhausted and am looking for an excuse to stop.

The Mnt Cabot trail starts with a relatively flat walk on easy ground across two streams before reaching what seemed to me to be a carefully crafted gradient that is constant forever.

Now, of course all hikes up mountains have this basic pattern (you’re going up a mountain after all) but in the case of Cabot, the gradient is not as steep or varied as some of the other 4000ft peaks we have done and because it is constant, it gets the burn in the calves going and pushes that heart rate and breathing up and then keeps it there for more than half of the hike.  This relentlessly constant gradient started more or less at the sign that announce the summit was 1.8mi ahead and kept it up till we reached the top.

The hiking guide has a time-to-hike calculation for average hikers - I think assuming fairly good physical fitness - and predicted that we would complete the entire hike in 6h50 so it was pleasing to see that we made it to the top in 2h45.  1 hour of this was easy hiking and the rest was on this seemingly endless constant gradient.

Near the top there is a fire hut that is open for hikers to sleep in.  There is no wood stove in there so probably not a good place to stop in winter and at noon when we got there there was a creepily large number of big blue flies on the inside windows of the cabin which would give me second thoughts about sleeping in there as well. 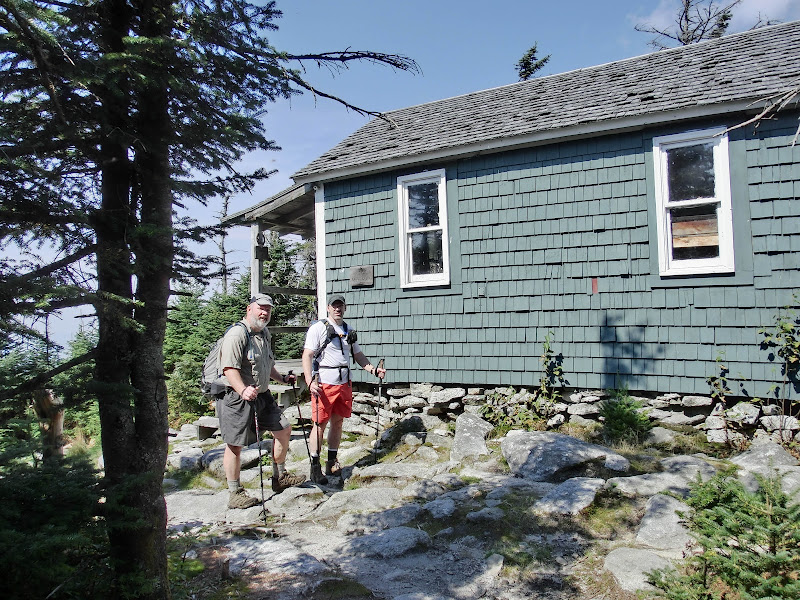 Off to the back of the cabin is one of the mountain “long drops” - these outhouses are some yards away from all campsites and cabins on these trails and I have gotten into the habit of always photographing them - some of which have spectacular views! 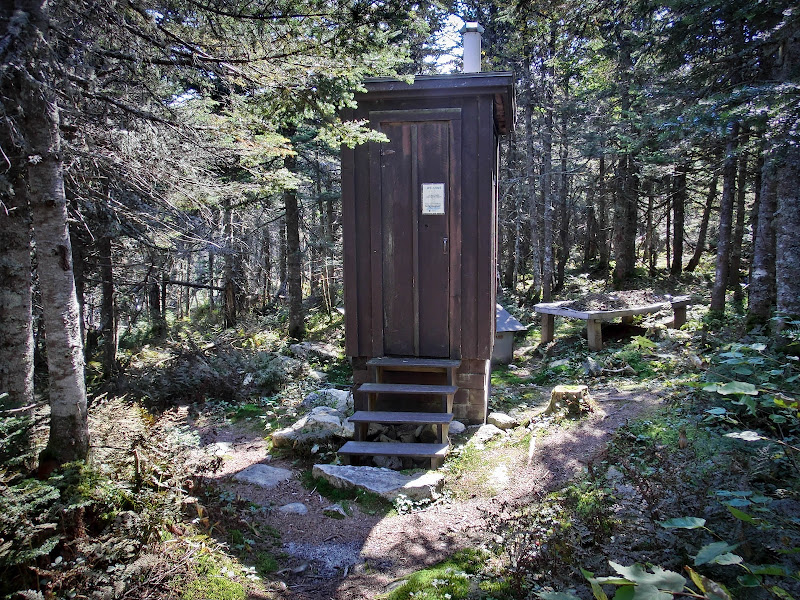 I took a look at google to see if there were some good descriptions of long-drops only to learn that the favored origin of the name is New Zealand and Australia, but it is a common name in Africa too.  Funnily enough, Walmart claims to sell them but when you visit the link, the images are far removed from an outhouse…. I wonder if they come with delivery and installation?

A few feet higher than the cabin is a heavily marked open area that seems to be the summit, with the trail going downhill beyond it.  John insisted that this was not the summit but this downhill walk went on for long enough for Bruce to take a look at the GPS to confirm that we had not yet summited.  The summit was probably another 15min walk further up a slightly ligher gradient than below the cabin and we stopped to record the historic moment under the sign announcing the summit. 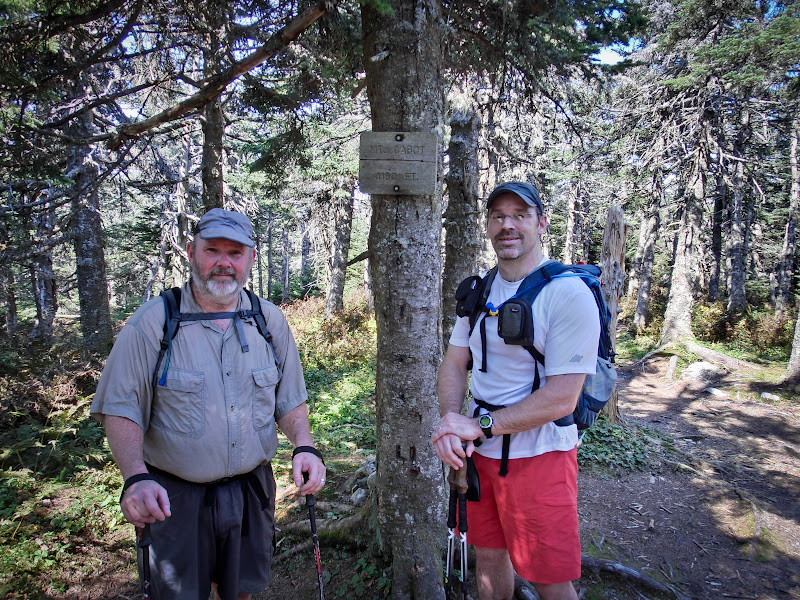 The hike down was not too bad, though as usual my legs and joints were feeling the aches of too many high steps.  I had been dismissive of hiking poles for the longest time, but I have to say that over the past several 4000ft climes they have repeatedly saved me from falls and twisted ankles (though the boots play a role there too).  I also find that I lean fairly heavily on them on the way down to save the aches in my knees which jar on every big down step.

Not too far below the cabin is a short trail to an impressive lookout across the valley and we stopped to take it in. 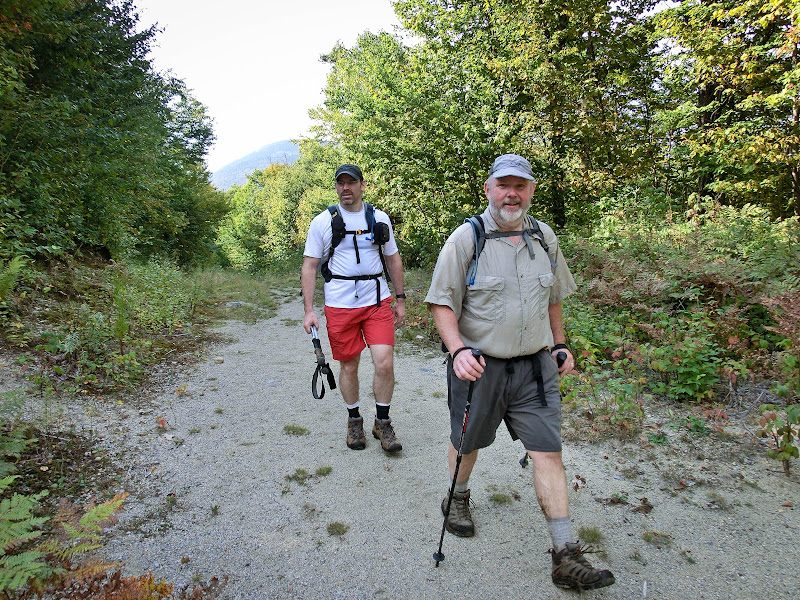 it wasn’t long before we had the celebratory beers in our hands. 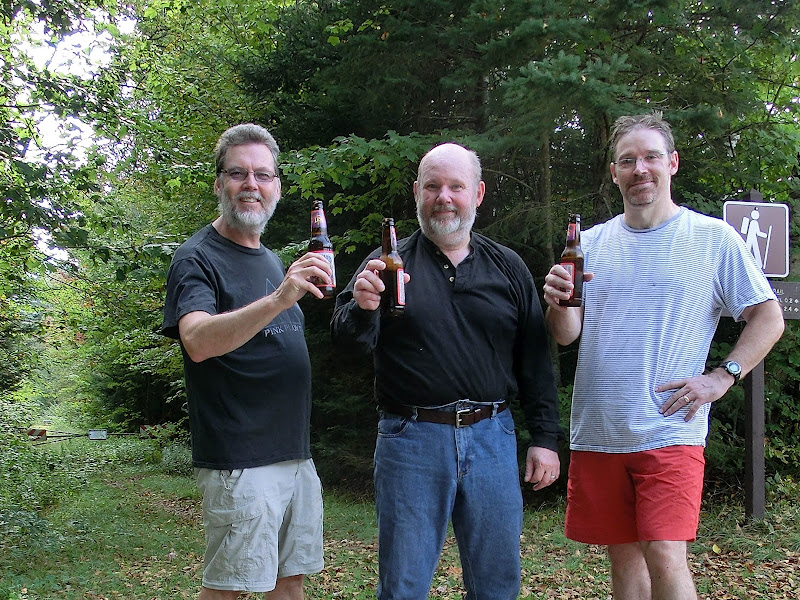 Somehow - after not paying too much attention to how many of them I’d completed, I now have a list and have marked off number 27.  Probably since Bruce is no longer going to be naming the next hike I’ll be slotting into a calendar that John and his wife have for their son who was one of my early hiking companions… it might be fitting for me to finish my 4000ft hikes with him who, at 6 was demonstrating a hiking tenacity that was admirable.