By the end of the 2nd day of hiking in Australia my feet and legs were pretty sore so when I heard what the loop was that John had planned for the 3rd and last day (somewhere around 12 miles/19km) I realized that it would be pretty hard for me to finish that without some fairly serious problems developing in my feet.

John compromised on my suggested 5miles by offering up a trail that would take use more like 8 miles from a small campsite called Cook's Mill in the Cathedral Range state park.

We left before sunrise.  I had forgotten to turn off my alarm and it rang at 5am so we figured we might as well head out.

There was a fairly dense fog.  I have learned later that the highest risk of colliding with wombats is at night and kangaroo around dawn and dusk.  We saw a few kangaroo and other small animal casualties on the side of the road over the few days of riding up near the mountains. 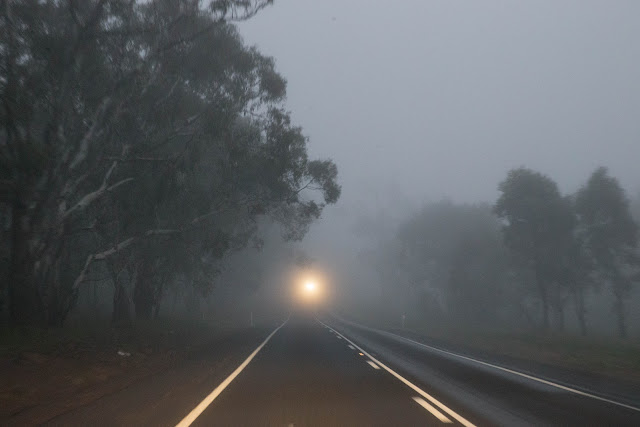 We stopped in a town called Alexandra where an annual Truck and Rod show was being hosted over the long weekend.  Fortunately the show activities were still hours away so we had a quiet breakfast in a quaint little store on the main road before heading on to the Cathedral Range National Park.

The road off the paved Rt B360 into the park is a dirt road and within seconds of turning off John spotted something jumping to our right in the fields.  I have heard that kangaroos are grayer and larger than wallabies so it is not clear which these are. 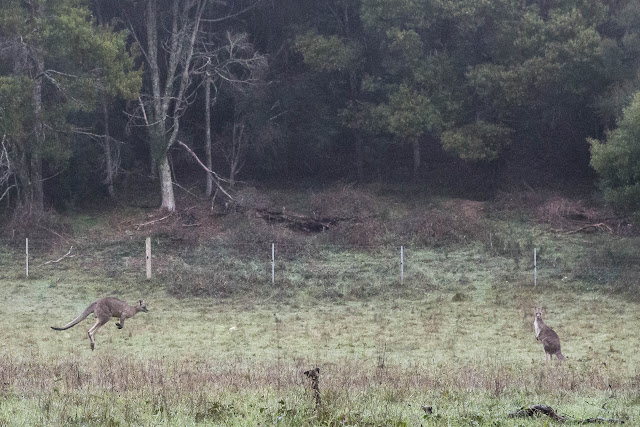 As we started our hike we came across a group of wallabies (this time it is clear) grazing near a tent in the campsite. 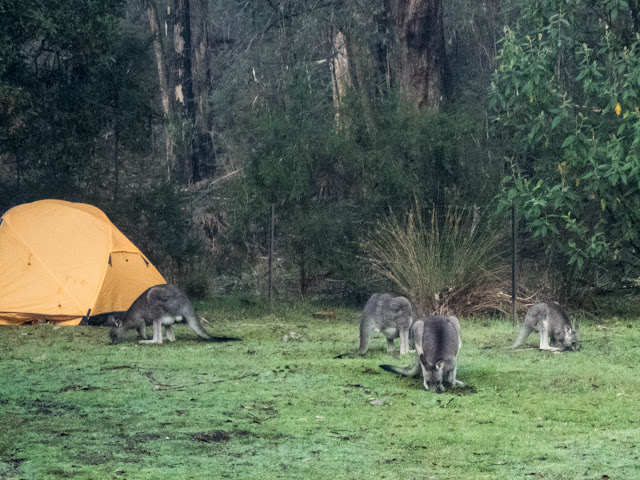 The hike took us up an all-wheel drive road for a kilometer or two before branching off into this wonderful rainforest.  The trees are huge and there is a thick covering of ferns growing about waist height in some places. 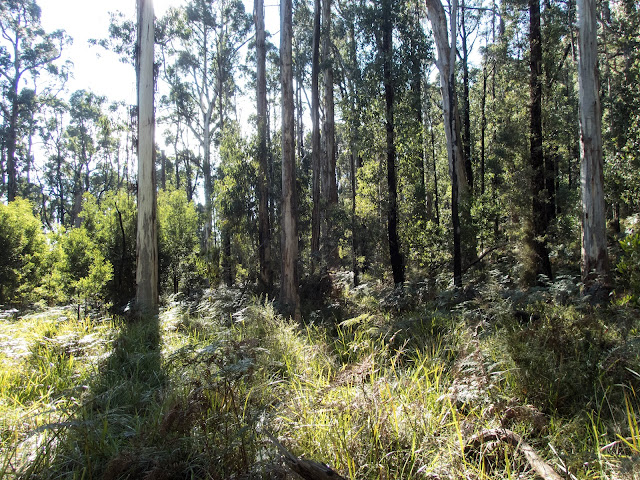 The path led to another dirt road with a parking lot just below the main section of Cathedral Ridge.

This was a pretty busy day up there.  Still not quite as busy as Mt Mondadnock in the summer but we passed a fire department rescue and survival training outing and then came across at least 12 parties of hikers through the course of the day.

The ridge is impressive.  A short hike from the road are some ledges and scrambles up a few cliffs (12ft high in some places).  I stopped to ask a fireman at the parking lot what the sign that said "some rock climbing" meant.  For me, rock climbing involves ropes and belay stations.  He hesitated and then said "it is rock climbing but you shouldn't need ropes, just hold on carefully".

We came across a couple of stranded hikers half-way up - I assume too scared to go up further with us so hot on their trail.  They whispered "be careful" as we passed them and I couldn't help wondering what I was doing scrambling up this rock when I was supposed to be jet-lagged in a hotel room in Melbourne.

The scramble was scary in places - particularly the last section which was exposed something like 20ft from the bottom.  There were good hand and foot holds so with some concentration not hard at all.

I turned to get a picture of John after coming over the top of the last part of the scramble.  To the left is a straight downward drop. 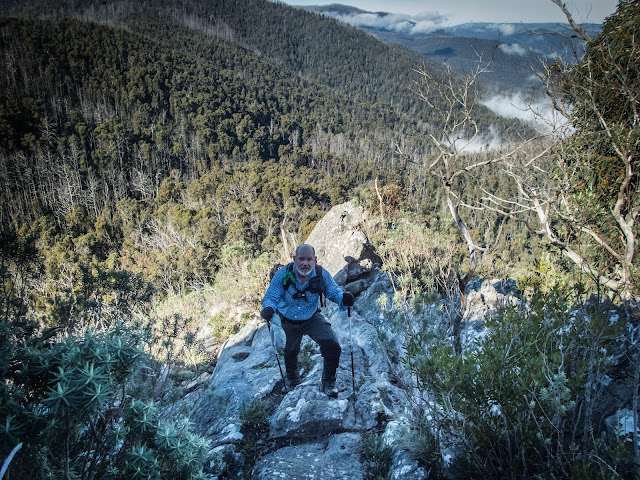 We were treated to a spectacular view from the top with the morning fog gradually burning off below us. 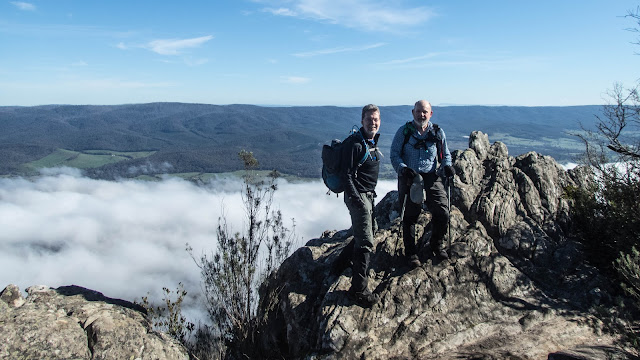 Ahead of us the ridge (a razorback) disappeared into the distance with the path criss-crossing the exposed edges of the ridge all the way. 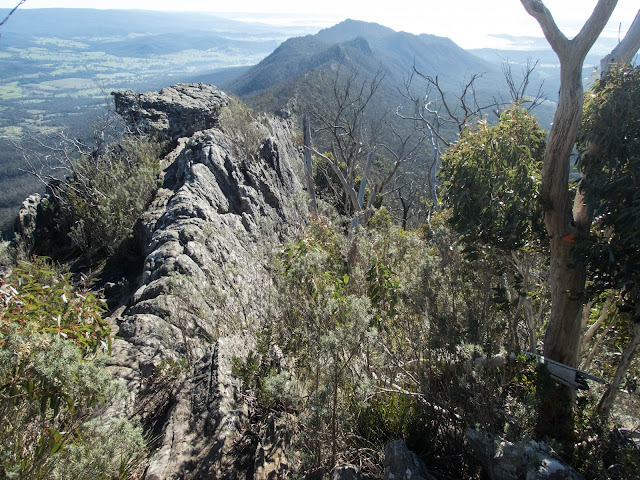 I was due for my next surprise as we climbed down from the main summit to the path along the ridge.  A drop of about 8 feet with another 12 feet of not quite vertical terrain below it gave me pause.  I had watched John slide over the edge and land his leg on a foothold further down but when I stepped forward to do it I realized that this slide was more or less without hand-holds to control it.

I took a chance at it and felt my body get propelled to the left - only marginally, but enough to change my mind about going down that way.  I wanted to be in full control of the angle and direction of my descent and so I retreated and thought about where to place my hands and feet (and the meaning of my suddenly very precious life).

I saw an option off to my right - more exposed because it was down a slab with a more severe drop - but seemingly with better hand-holds and an option to edge to the right and back onto the rock that John had so deftly landed his foot on.

It took several minutes for me to choreograph this all in my head - long enough that John - already somewhere further off down the path wondered where the hell I was and came back to ask if I had everything under control.

In the end it was all pretty straight forward but I was instantly sobered by a plaque in the rock some yards ahead set as a memorial for a 15year old boy who had died from injuries sustained in a fall on this trail in 1983.

We moved quite easily over the remaining trail - passing a couple of groups of teenage hikers.    I stopped to get a shot of John on one of the prominences that make up the ridge along the trail. 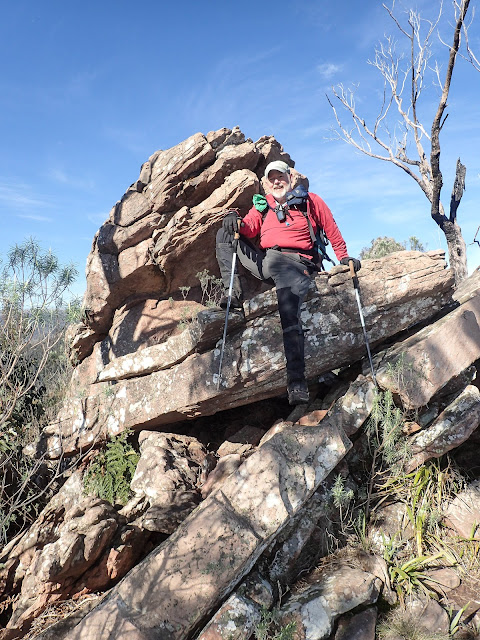 Some of the rocks showed evidence of anomalies which caused uneven erosion and left little knobs that are more resistant to erosion.  I supposed that this rock is igneous and that these are crystals that formed when the rock was forming. 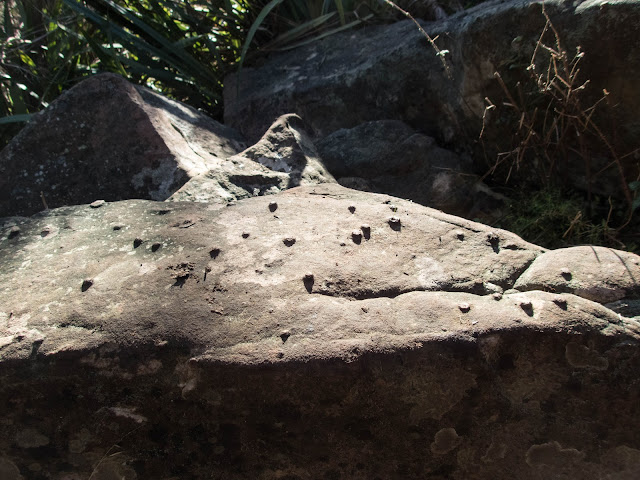 The hike back down to the parking log through the rainforest was uneventful and pleasant (except for my now very uncomfortable feet and ankles).  We had hiked a total of 57km (35mi) over the three days and I was ready for a rest.

We decided to drive up over the road that we had crossed to get to the bottom of the rock scramble so that we could see the ridge from the road.   We weren't able to get a clear view of the main summit but did spot one of the prominences further along that we had hiked over. 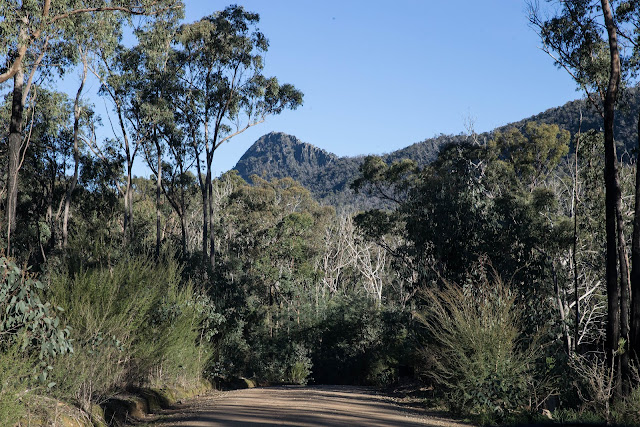 Our route back was through the Yarra Forest - beautiful large trees on a winding road. 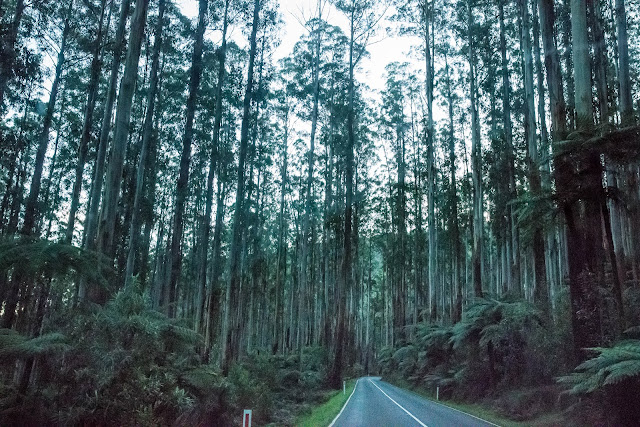 I held the camera out of the window for a vertical perspective from the car. 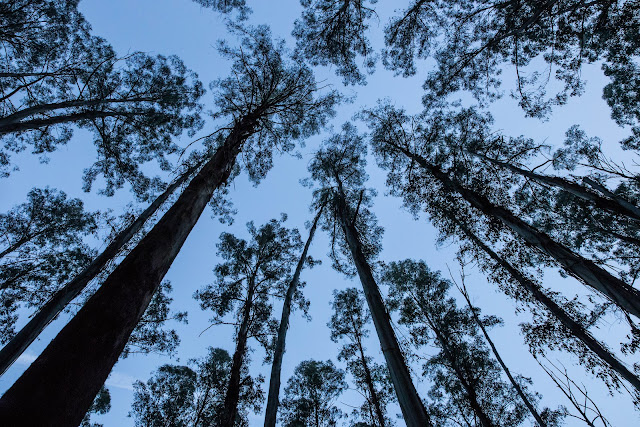 The road trip and hikes were slightly marred by the traffic on the way back through Healseville and Lilydale with back to back traffic for a stretch of about the same distance of one of the day's hikes. 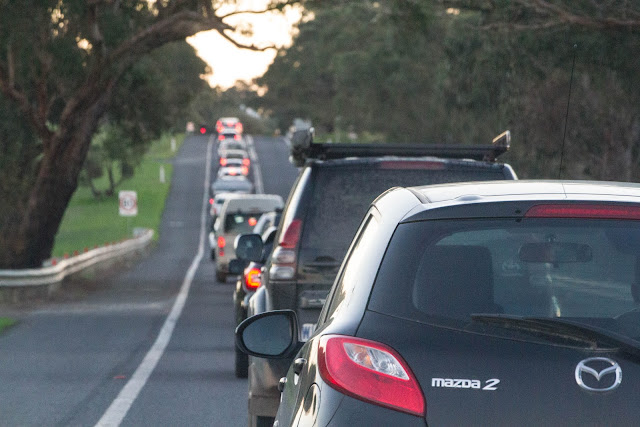 The traffic cleared as we approached the M3 and made our way to the fancy hotel reserved for us for our business trip.

John and I arrived in three days of hiking clothes, muddy boots with a half-gallon of milk under John's arm which prompted the hotel receptionist to ask "Where have you come from?" in a slightly high-pitched voice.

I felt the urge to say:  "We've come too far to turn back now." but we politely told her we'd been to Bonnie Doon.