Have the honeybees recovered?

An article in a paper in New Hampshire on Honeybees

Have the honeybees recovered?

I posted some information on this in April but have not come across any more recent articles on CCD.
Posted by Tim at 8:13 AM 0 comments

A friend sent me this article on some MIT students who took photographs from space for a cost of around $145.

Very cool project! They had to figure out how to keep it cheap and also avoid FAA regulations that limit the payload weight of baloons - they kept it at 800grams.

The problem of how to find it? A cell phone that sends location text messages.

They found the rig 20miles from where they launched it and the pictures on the SD card in the camera.

Taking the pictures was achieved by loading software on the Canon point and shoot so that it would take pictures continuously and the used hand warmers and a beer cooler for insulation to keep the electronic components warm enough for the flight.

The full list is on their Photographs from Near Space site 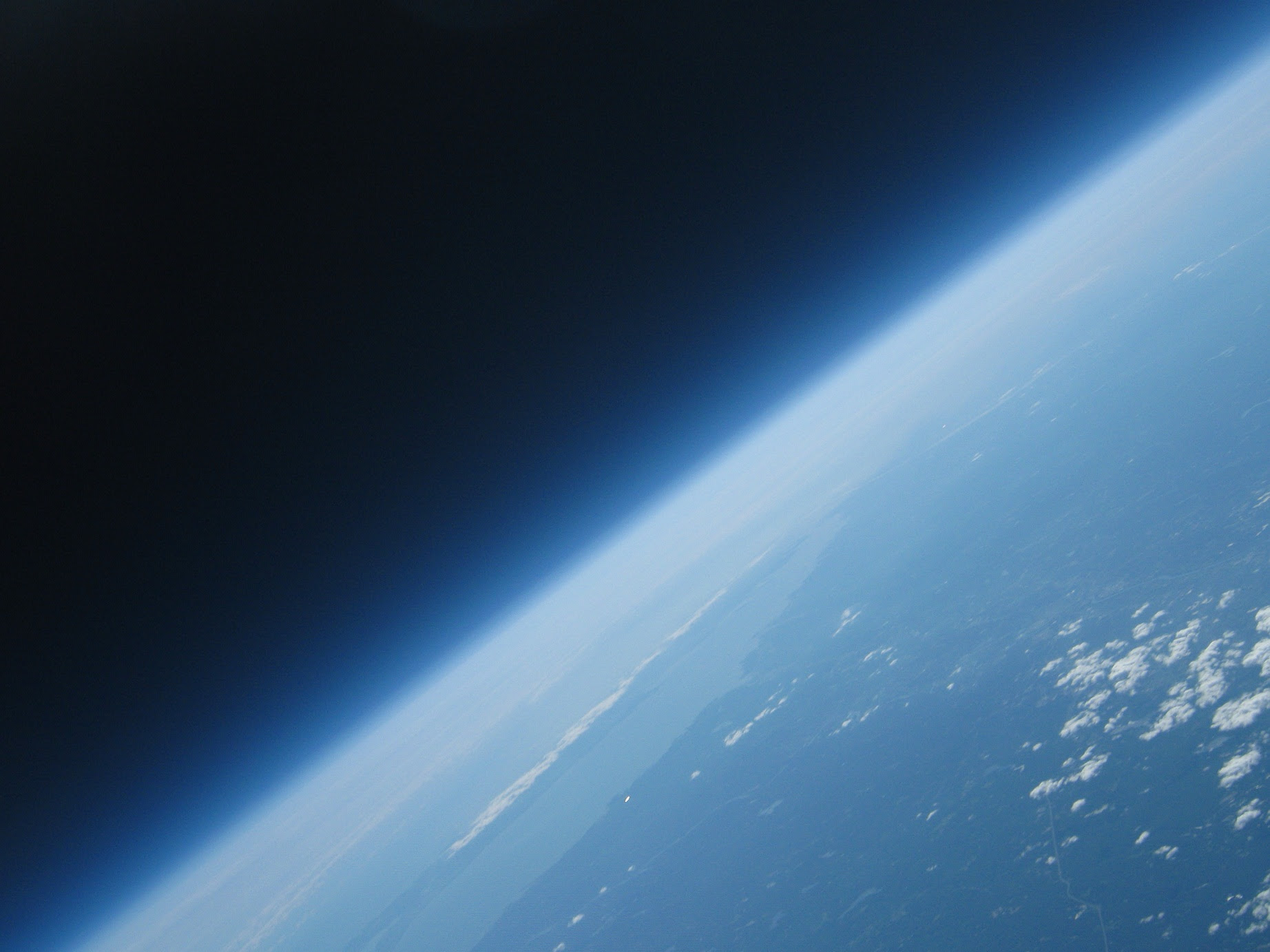 A friend forwarded this article to me about Cell phones and their radiation.

Although the article points out that not much is known about the effects of this radiation it would be wise to be cautious about use.

South African's and teenagers in the US will be pleased to see that one of the tips is to text more and speak lest.

Here are the tips:

As part of the report, the EWG also provided eight safety tips for cellphone users who are concerned about radiation. Here is a quick list of the tips. You can click through to the original list for more detail on each of the items.

1. Buy a low-radiation phone
2. Use a headset or speaker
3. Listen more, talk less
4. Hold phone away from your body
5. Choose texting over talking
6. Poor signal? Stay off the phone
7. Limit children’s phone use
8. Skip the “radiation shield”
Posted by Tim at 6:04 AM 0 comments

Parasites - or "why you love cats"

A couple of years ago I read a book called Parasite Rex. I used to tell stories over evening meals about what I had been reading in the book (much to the horror of my family).

I was reminded of this book recently when I heard this episode of a really good podcast that I listen to every week - the podcast included interviews with the author of Parasite Rex.

The book has absolutely fascinating information about how parasites improve their survival chances by in some cases affecting the emotions or instinct of the animals that they inhabit.

One example that caught my eye and was mentioned again in the podcast is toxoplasma gondii which is hosted in cats. The story is that cat feces contain the parasite. It gets eaten by rats and the parasite goes into some part of the rat's brain and makes changes there that makes the rat love the smell of cat urine and lose its fear of cats so that cats can eat it!

That is weird in itself, but researchers have found that when humans have ended up being the inadvertent host of this parasite (through our contact with cats) the parasite possibly tries to do the same mind control trick that it does on rats - excepting our brains are different so the results are different! A great percentage of Europeans test positive for toxoplasma gondii (I think I remember it being 3 out fo 4).

Some of the speculation is that when you have the parasite your affection for cats may increase, increased promiscuity and being more reckless on the road (6 times more likely to die in a car accident).

If you haven't come across it before, I highly recommend Radio Lab. My favorite episodes are the ones on Laughter, and Musical Language.
Posted by Tim at 7:00 PM 2 comments

Every year around this time flying creatures start migrating south for the winter.

Some migrate all the way from Northern Canada down to Florida or South America and there are some incredible stories of tiny hummingbirds that fly from New England all the way South and then across the Gulf of Mexico. This is one incredible journey.

Raptors migrate too and people go out to hills and mountains around here to watch them fly by.

I have been a couple of times, but saw a blog post forecasting a few good days of Hawk watching coming up.

So Anne and I headed up to Pack Monadnock today to watch for Hawks.

Pack Monadnock is in Southern New Hampshire near Peterborough and has a road that goes all the way up to the top. This means that plenty of people have access to the top and it was pretty crowded when we got there with families on fold-up chairs, a guitarist and plenty of birdwatchers. 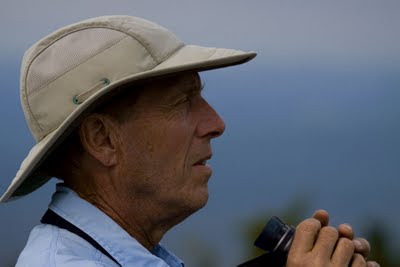 I was told that we missed a Hawk that came by and buzzed the artificial Owl that they have up there for the purpose of attracting Hawks closer.

I looked for the couple whose blog I had seen. They are celebrities in the birding world up here having made TV documentaries and published over 60 books on birds and birding and I took a photograph of Don as he was surveying for birds.

The serious birders up there are quite phenomenal. Don was identifying birds that we could not see with the naked eye - which means that they were mere specks in his binoculars.

A few birds came close enough for me to photograph, but we didn't have great shots of them and in the end the photograph that I most liked from the day was a dog snuggling up to his master. 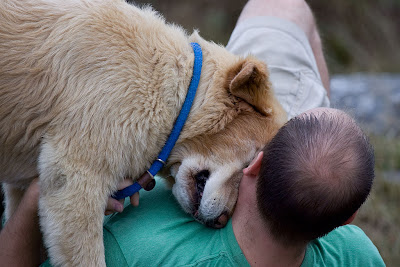 Next week they will be releasing a few captive Hawks and if I can get some time this week I am going to head up there again. We heard stories about over 500 Broadwing Hawks settling down in the trees around the mountain as the sun set at the height of their migration in past years. Now that would be a sight to see.
Posted by Tim at 6:43 PM 0 comments