Anne remembered that today is the 9th anniversary of our arrival in America.  It is astonishing how quickly time flies and hard to imagine how our naive assumptions about moving could have led us to where we are now.

Through the 80's and 90's there was a steady exodus from South Africa of people who had the means either through ancestry or other connections to places like the UK, Australia and New Zealand.  We had toyed with the idea of leaving and of course it was a topic of many conversations at dinner tables in our home town of Grahamstown. 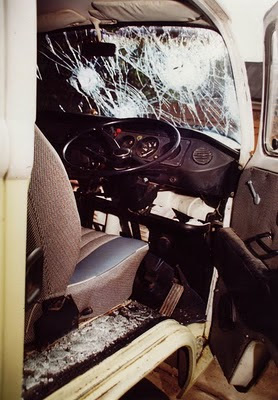 If we had the means we would have left South Africa without a second thought in the mid 80's when the Government repression of anti-apartheid activists touched us personally or in 1992 when Anne narrowly escaped being killed by a mob of violent teens who pelted our VW Kombi with rocks as she was driving home from school.

In the mid 90's with all the new hope of universal franchise and Mandela's release, talk about leaving was a tougher conversation but when the opportunity came to visit friends who had moved to America and the subsequent job offer in Boston, it seemed like a good idea.

I remember going to the police station in Grahamstown to get a police clearance certificate and looking on the wall at the crime statistics.  It was the first week of the month and the numbers of rapes, murders and thefts amounted to around 5 a day each.

We had friends who had been personally affected by violence on their farms (murders and robberies) and who had been carjacked at gunpoint.  To be clear these things had been going on in the bigger cities (Johannesburg and Cape Town) for a long time, but we lived in the small university town (Grahamstown) where this sort of thing had been very uncommon and it felt like we were somehow caught in a downward spiral.

I had felt that rather than join the flock of people who were leaving because of their fears of what a black government might mean for the white minority, I'd prefer going to a country that was less popular a destination for South African emigrants.  Where being South African was not as big of a deal. 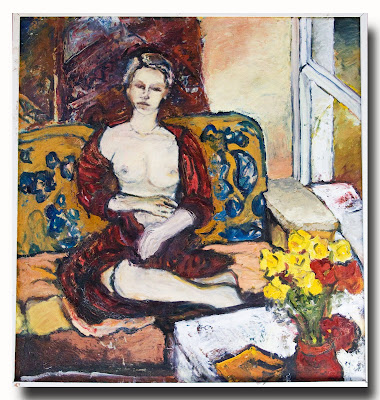 Some of our basic views that came from how government was perceived in South Africa and, for example, how you feel about weapons are not just hot topics here, they form the basis of entire political movements.

Figuring out driving on the right hand side was not too hard.  You do have to watch yourself stepping out to cross a road because we were trained to look right first which is dangerous over here with the cars coming from your left.

The work environment was very different too, I went from a very safe job, one that was more or less guaranteed if I worked consistently - to an environment where 1 in 10 companies were destined to failure and the people working for them subject to retrenchment as the need to downsize arose.

American immigration (if you do it properly) is not an easy process.  My work visa tied me to an employer whose sponsorship had to demonstrate that they had not been able to find a local person with my credentials.  This was easy when I first moved here because the high-tech bubble was just about to burst and qualified, capable people were hard to find.

In September 2001 when the tragic attacks on the World Trade Center shook things up, a number of these high-tech start-up companies found bridge funding opportunities

drying up and ours was hit hard.  We faced having to find our way back to South Africa if I wasn't able to find a new visa sponsor.  We had more or less committed all of our resources to getting here in the first place and this was something that weighed heavily on Anne and I.  Indeed the thought of not having work in this strange land with no family or other support was a preoccupation for me until the green card sponsored by my second employer (which took around 6 years with all the paperwork and other processes) came in 2007.

All things considered we have been incredibly lucky.  The second company that sponsored me has been surviving well and the work (and some of the people that I have worked with) has made it interesting and rewarding.

Our big regret (and it is something that I wish we could have foreseen) is that our daughters can't live in America.  One of them works in England and the other in South Africa so we get to see them far less frequently than we would like.

I have come to understand American politics a little better and to value the skepticism that most American's feel about bureaucratic competence.  In particular I value the strong ethic that dictates that you find your own way in the world (work for what you want, don't assume that you are somehow entitled to it).  This is something that I value my sons learning here as they begin to make their way in the world themselves.
Posted by Tim at 2:05 PM 0 comments 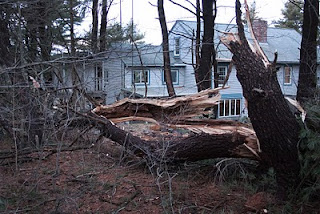 A storm moved through last night that had gusts of winds that reached 70mph in our town. 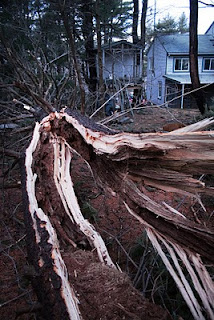 The rain started in the afternoon and by night we could hear the wind picking up until at about 11:30pm when the lights began to flicker and Anne called me to tell me that she heard a tree crash outside.  She heard a few more crashing sounds before about 12:30am when it all quietened down.

I went outside this morning and discovered that we had had a pretty close call.  There were 3 trees near our house that had snapped like twigs.  Large pine trees with a trunk diameter of at least a meter had been snapped clean in two.  In other places in the wood behind our house the roots were ripped from the ground that had been softened by the rain. 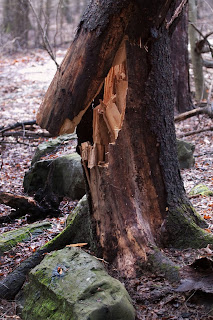 At about 7:20am the boys were ecstatic to learn that school had been canceled.  I drove to work and stopped on the way to take some pictures of the scenes of destruction.

The Ipswich River Audubon reserve near my office is a place that I sometimes sneak out to on the way to or from work.  The one road to the reserve was closed - I suppose because a downed tree had broken some electrical wires - and I had to drive around to approach it from the opposite side.  The people working there saw me get out my car with my camera gear and thought I was the insurance assessor come to take photos of the trees! 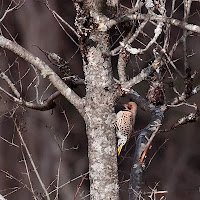 There were a couple of hawks out hunting and I managed to get my first photograph of a Northern Flicker - it was pretty far away so is not much more than a record shot, but I was still pleased to get it!

On my way to the office after a quick walk in the reserve I noticed a house with a tree lying squarely on the roof.   The owner was out taking a look at the damage so I felt a bit uncomfortable about stopping right then.  I took another trip to the reserve this afternoon after work and stopped to photograph the house.  By then the tree had been cut back off the roof and you can see the sagging dent where it lay. 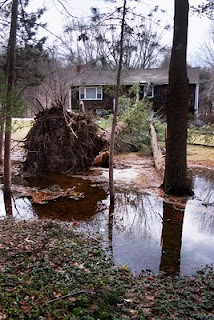 Matt and Nick were in the district finals for the North Shore of Boston - about 6 schools in the Cape Ann League competed this past Sunday. 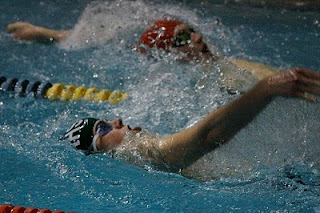 Their school doesn't have a very strong swimming program and they finished at the bottom of the league after the season's competition.

They had an opportunity to compete once more against all the schools in a championship at Salem State College's swimming pool as a finale to the season.

Nick's events are 100m butterfly and 100m Individual Medley and Matt competes in 100m backstroke and 100m freestyle.  The both did really well.

Matt lost his goggles in the dive for the freestyle event and the distraction cost him time so this event didn't go well for him.  In backstroke he placed 7th in the district (there were 4 heats of eight swimmers each) and improved on his season's time by a second or so. 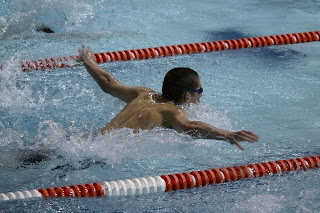 Nick finished first in his heat for butterfly and was placed 6th overall - this event had about 3 heats of 8 swimmers altogether.  The freestyle 100m had many heats and Nick placed 7th overall there as well.

They both swam in heats that they were strong in so it was cool to see them come in with times that placed them high in their heat and beat a couple of the competitors in the fastest heat.
Posted by Tim at 10:11 AM 1 comments