We moved into our house in 2005 and noticed a small hand-built cat house with a window and an electrical cord outside our neighbour's back door.

This was Lily's home. She had lived with our neighbours for 10 years until their other cat had kittens. As the kittens grew they (and their mother) began to ostracize her to the point where it looked likely that they might kill her. Our neighbours had no choice but to move her out of the house. 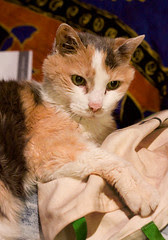 New England winters are bitter and our property is on the edge of a wood, so Lily had some pretty tough obstacles to face. A fisher cat that wandered around near the house and, of course the winter snow and temperatures that frequently go below 20F (-6C).

Our neighbour came up with a pretty cool central heating idea - a naked lightbulb in a can in the little house kept the temperatures reasonable, but of course Lily was not able to stray very far when the days were miserable. She lived this way for 6 years. In the summer roaming fairly freely and more or less house-bound in the winter. She became fairly wild.

At one point, a kindly friend of theirs offered to take Lily in, but the cat crawled in under her bed and scratched her arm to pieces when she tried to coax her out of there - so Lily was returned.

After the first winter of seeing how Lily lived, I (not a cat person by any means) suggested to Anne that we ask our neighbours if we could look after Lily.

They warned us about their friend's arm, but said if we were up to it, they would love to have Lily in a home again....

Lily was pretty wild by this time and would not come anywhere near us, so I had to wait until she was in her house and hold the little door closed as I brought her in through our back door. When I got to the door I realized that the cat house was not going to fit and in the process of tipping it, Lily escaped and was gone for hours! We put her house back where it had been and waited for her to come back before managing to get her more carefully into our house.

She would not come out of her cat house for days and spent many hours stuck under one of the beds, but we let her be and after a few weeks she started coming out briefly to greet us.

Our black Labrador is so unconcerned about other animals that she was pretty disinterested in Lily - of course the first time she had the cheek to sniff at Lily she almost got her face ripped off - so they pretty much kept out of each other's way after that.

She has lived with us for 4 years now and turns 21 in Feb 2010. This picture is of her lying on my wife's lap... a rare occurrence - she will come to you for a few minutes but hardly ever lie on you. Anne can pet her for ages now.... and Molly the Labrador can walk by without threat of injury.


Update: 10/12/2010 Lily died today - sweet thing. We will miss her - this independent survivor and early morning loud greetings and complaints to be fed.
Posted by Tim at 2:23 PM 3 comments

I came across this article today in the Boston Globe.

It describes a newly discovered virus that is implicated in chronic fatique syndrome and some cancers.

Posted using ShareThis
Posted by Tim at 4:02 AM 0 comments

A day at the faire

We went to the King Richard's Faire in Carver in Autumn 2003.

We had been in America for almost 3 years by then and were amused and intrigued by the homage to English Renaissance characters and scenes.

There is a strong fetish undercurrent at the fair - I say undercurrent, because you wander around and into the stalls and see wonderful crafts in leather, cloth and steel and after a while you begin to notice the odd fetish item interspersed: collars, harnesses and something that looks like a horses' bit for people.

That aside, a surprising number of people who visit dress up for the part and womens' attire is definitely bold.

This year we went to photograph Cranberry bogs with the photographic club that I belong to and two friends and I decided to stop by at the Faire on our way home.

Apparently these renaissance fairs are fairly common in America and are a treat to visit. They are colorful and full of buxom lasses all willing to pose for photographers. 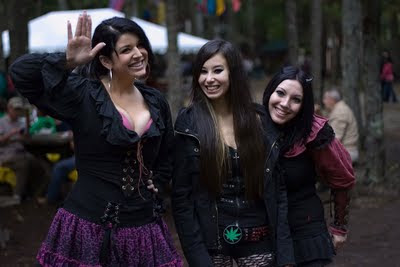 You can view a slide show of the images that I took of many of the colorful people that I met there this year.
Posted by Tim at 4:02 AM 0 comments